Simplicity. Elegance. Almost as good as a nap…. 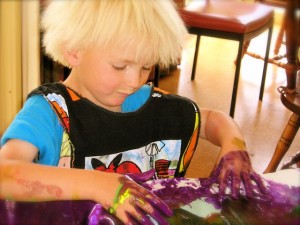 I’m just sitting her at my computer thinking how simple it is, sometimes, to get it right.

As I sit here, my frothy little bubble of a three-year-old named Abi sits at a desk a few feet from me and sings to herself with her little feet swinging back and forth as she cuts out the page she colored.

It was an idyllic moment that I hope I will remember as a snapshot of loveliness for all time.

But the day didn’t start with such simplicity.

In fact, I was sick in bed trying to get some rest and get it together.

What started as a tearful interruption of my nap (“Abi ruined my birthday cake!”)–the birthday cake in question being a coloring page from five-year-old Meri’s Sunday School class–became an all-morning project for several kids.

I tried to resume my nap with promises that as soon as I got up I would help her make a new, better birthday cake.

The nap did not resume, but a great Core and Love of Learning day did.

I got on my computer and printed out a birthday cake coloring page I downloaded from the net, and within a few minutes Meri was fussing again that Abi had ruined it (it was left unattended with watercolors next to it).

I assured her that Abi just wanted to participate, and Meri suddenly became helpful, sharing the paints and suggesting this and that.

Soon I had several other kids coming to me for their own copies, multiple times, showing off to me their creativity and taking pictures of their various versions with the cell phone, etc.

Now “Les Miserables, Full Symphonic Recording” is blaring from the kitchen with the youth and little ones all joining in singing the parts of Enjolras, Marius, Eponine, Valjean and Cosette (starting it over and over to get the words on the mob number right) as the kids cheerfully make lunch together.

And it all started with the five-year-old’s ruined coloring page.

But I’m feeling pretty good about the day.