The Power of a Dad’s Role: The Weekly Mentor by Oliver DeMille

“My father gave me the greatest gift anyone could
give another person: he believed in me.”
—Coach Jim Valvano

What They’re Looking For 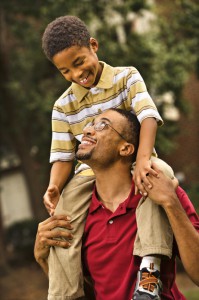 There are three things dads can do that will make a huge positive difference in the education of their kids. First, and most importantly, they can realize that children and youth look to their fathers for confidence.

A father that does this is incredibly effective. Indeed, this is among the very most important things a father can do. Sadly, many fathers don’t do this very well.

Instead, with words and looks and attitude they too often communicate the following: “I’m not very impressed with you.” “I doubt you’ll ever measure up to much in your life.” “Why do you always fall short?” “Why can’t you be better?” “Why can’t I trust you?” “Why do you make so many mistakes?” “What’s wrong with you, anyway?”

As Dr. James Dobson put it, every twelve-year-old boy is a wounded soul in need of healing. And the great novelist Salman Rushdie wrote: “The reality of a father is a weight few sons can bear.”

If you are a father today, think back to when you were a young man. Did your father always make you feel confident? Worthy? Impressive? Amazing?

Or did you often feel like you weren’t measuring up?

The power of a father’s influence is very real, and in many cases it lasts a very long time. Some dads do a great job of helping their children and youth feel amazingly confident.

Of those fathers who don’t do this very well, most of them don’t fall short because they fail to try. Not at all. Many of them try very hard to be great fathers. But they just don’t clearly understand that their main role is to surround their children with Dad’s confidence. Or, for many, they are unsure of how to do it.

This isn’t taught as widely as it should be. In fact, many fathers feel that their main roles are to provide and protect. Both of these things are true. But instilling confidence in their kids is a third role at the same level as protecting and providing.

Fathers who don’t do all three fall short in giving their children what they really need.

Many dads provide and protect, but instead of instilling confidence they try to do a mother’s role: give the children a vision of who they can be. This is why so many dads are often critical—they just want to help their kid do better so he’ll measure up.

This seldom works. In fact, it usually backfires.

Criticism from a dad is the opposite of showing confidence. For example, a friend of mine, a successful business leader who was raised by his mother after his father’s death in an accident, told me that when his mother wanted to instill vision in him and his siblings, she talked to them directly. 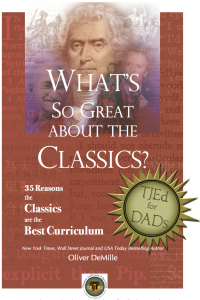 This mother clearly understood the teaching roles of fathers and mothers. Some of the greatest educational psychologists of modern times, Jean Piaget and Erik Erikson, both taught that the parenting roles are vital.

Fathers and mothers both provide and protect, love and nurture; but young people get a sense of life goals from mothers and the confidence in themselves to pursue such goals from fathers.

—Or not…depending on the parents’ choices.

When dads build confidence, they accomplish more than almost anything else they do. Whenever in doubt, build their confidence. In fact, even when you’re not in doubt, genuinely building your kid’s confidence gives them real power to improve themselves and their lives.

(This article is an excerpt from the book What’s So Great About the Classics?: TJEd for Dads by Oliver DeMille.)