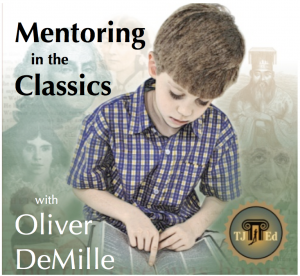 Mentoring in the Classics has a new home, but for those already enrolled following our original schedule, here is the list, in order, of monthly readings:

Gatto’s Dumbing us Down is a fitting introduction, describing in uncompromising terms the need for the type of education we’ll pursue in this series.

Lindbergh’s Gift from the Sea simply cannot be read incorrectly; it is all about pondering, applying it to your life, thinking creatively, intuitively, authentically. Careful thought has gone into the succession from Gatto to Lindbergh – the former being an exposition of what is wrong, the latter, a “healing” book; first the “tell”, then the “show.”

The Audio Mentoring and Study Guide for Lindbergh are important, as they establish the unique and effective methodology by which this course will progress.

Please take special care to familiarize yourself with the 5 Levels of Engagement with the Classics outlined in the audio mentoring and the Study Guide. This will greatly enhance your enjoyment of the rest of the titles we cover, and help you to glean and apply from them in meaningful ways.

As Austen’s Pride and Prejudice is a longer work, the months previous and following are less time-consuming. It’s a favorite – both familiar, and worthy of repeat reads. Is there a book out there that Hollywood has adapted more times? There must be a story there, LOL. You’ll have time to get into this lengthier title early, as Lindbergh is sweet, profound and actually quite concise, and a great backdrop for this insightful and witty work.

“The Present Crisis” (link downloads PDF) by James Russell Lowell is a profoundly beautiful (and short!) work, which Oliver will give a line-by-line treatment – thus reinforcing the participants’ ability to appreciate and comprehend the language of the classics. This provides a great segue-way to next month’s Shakespeare, which some have avoided because of the unfamiliar language, and which is so beloved by readers and theater-goers for generations.

The progression from Two Gentlemen of Verona (the Shakespeare play on homeschooling) and Potok’s The Chosen is especially poignant, as they have similar plot elements. Both address the power of education, especially Scholar Phase education; both consider the affect of education and upbringing on the individual outcomes in adulthood.

This month’s selection, The Declaration of Independence, (link downloads PDF) is a freedom classic that articulated for the world, then and now, the nobility of the human soul, and the inestimable worth of liberty. As this is a shorter title, you’ll have time to get started early on next month’s reading!

After 6 months of MIC, you’re ready for some deep and moving stuff! In our original rotation, this was our August selection – a month when many gear up for school again – and yet straddles the “summer/fall” line. Les Miserables does double duty as a great beach read and a serious scholarly challenge. Life changing! If you’ve read it before, you know; if you haven’t, you know you’ve been meaning to….

Again, the selection preceding the monumental Hugo is short, as is this month’s: Lewis’ “The Inner Ring.” This one is perfect to help define Why We Do What We Do. Originally our September 2014 reading, it is timely, as the advent of fall and “serious” school often puts our goals and methods under the scrutiny of measuring up to others’ expectations, and demands that we have clarity of vision and purpose, to follow our inspired–and inspiring–path.

Our October 2014 content first debuted in the season when many of our participants are in the thick of home or classroom studies, and so we introduce our first math classic (if you don’t count The Chosen – and maybe we should!). Schneider’s A Beginner’s Guide to Constructing the Universe is an easy read and tends to turn math haters into math lovers, and math lovers into serious math students.

This month brings another perennial favorite: the courageous Jane Eyre. Bronte’s beleaguered and faithful heroine always inspires such meaningful discussions. The Debriefing Audio for this title featured more than one serious about-face from our participants with regard to their love or hate of this book. Lively and penetrating, you’re sure to enjoy this one!

Our December 2014 reading highlighted a time when many of our participants suspend their normal routine to focus on family, traditions, worship and celebrations. In this spirit, we have chosen a great family read: Little House in the Big Woods by Laura Ingalls Wilder. If you find this a strange choice, trust us. It’s chock-full of amazing content – especially on the topics of family culture, education and community. Oh–and it’s not a “girl” book. Seriously. There are bears, whittlin’, and all sorts of manly fare.

And that wraps up our first year with Mentoring in the Classics!

If you want to look ahead to the upcoming titles, here you go:

We will periodically update the reading schedule so that you’re kept informed of the coming books that are not yet listed.

We’re delighted to have you join us for Mentoring in the Classics. Please join the conversation on our Facebook Discussion Group! [click here to join >>]

Rachel DeMille, TJEd.org
“An Education to Match Your Mission”