Through the Peek Hole: One Mother’s View on TJEd 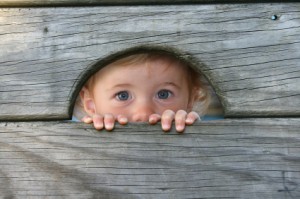 I find it interesting that when something is right, it sometimes has a way of making itself known to our hearts almost instantaneously.

It just “feels” right and something cries out from deep within our very souls.

Then doubts may come, but only because the heart has to compete with the mind–especially when a new idea goes against tradition.

I believe that somehow our society’s educational traditions have gotten off track.

It was that insight that prompted me to make the attempt to teach my own children. But I also knew I couldn’t continue by myself indefinitely; I needed help! Badly.

I’ve always believed in building on what you have – weeding out the bad and improving on the good.

I tried with all my might to “build” upon our public school system (classroom helper, homeroom mom, PTA, parent committees, school board), but in our case it just wasn’t enough.

Our family needed to make a change in ourselves.

The decision to “weed out” our dependence on a school system was decidedly the most difficult decision of my life – a gigantic leap of faith! ‘

It took over a year, once the thought took hold, to gain the courage to do so.

With a very poor beginning, feeling alone and unprepared, through lots of tears and time spent on my knees, I began my experiment, knowing that my children’s future was at stake.

Talk about pressure! This was an enormous crossroad for our family – our Rubicon.

Taking this road would forever change the course and destiny of my family.

Would it be for better or worse?

I read many different books on educational philosophy over the course of about seven years, searching for answers and learning by trial and error on my “guinea pig” children.

I wanted them to have a superior education, but my own limited understanding and poor study habits were a definite hindrance. I wanted more for my children.

What parent doesn’t want that?

Four years into my homeschooling experiment, I was introduced to the book, A Thomas Jefferson Education.

There are a few books that when you initially read them, simply resonate with your spirit.

A Thomas Jefferson Education is one of them.

By that point I had learned a great deal about what worked for us and what did not.

I was doing okay, and I was remarkably happy with our progress as a family–in spite of all the limitations and deep-seated fears that continued to nibble away at my confidence.

I knew it was an improvement on our experience with public school up to that point, but it still wasn’t enough.

A Thomas Jefferson Education was an answer to prayer.

My heart tells me they are correct principles; my experiences have confirmed them.

However, friends, family, acquaintances, and even my own “conditioned” beliefs continue to fling traditions at me that keep me from implementing those principles to their full potential.

Bad habits are so hard to break! Yet the principles are there.

The paradigm has shifted.

My vision and understanding of education – what it is and what it is not – changed drastically after reading about TJEd. Once your eyes are opened to a grand view of a beautiful scene, you are never quite the same afterwards.

We stumble, fall, question, and encounter roadblocks along the way, but we cannot go back once we’ve seen it… and be happy.

Among all the substantial insights gained from reading A Thomas Jefferson Education, there were two key points that particularly captured my attention.

The most striking was the injunction to “Inspire”.

I have always known that the power of example is tremendous.

Like the saying goes, “A picture is worth a thousand words”.

But it especially hit home on one occasion in particular that I’ve never forgotten.

When my youngest son was just a toddler he began exhibiting some very odd behavior.

For no apparent reason, he would suddenly stop whatever he was doing, walk towards a blank wall or door and press his face against it, stand there for a few seconds, then just as suddenly turn around and go back to whatever he was doing before as if it were the most natural thing in the world.

He would do this at least three or four times a day.

My husband and I would look at each other and wonder what prompted him to act in such a bizarre manner.

It was the only abnormal quirk he exhibited.

He acted much like any typical toddler in every other respect, so we weren’t overly concerned, but we were certainly curious!

We often made comments like, “He’s YOUR child” or “He must take after YOUR side of the family”, and would just laugh it off, knowing he would eventually grow out of it.

But I’ll be forever grateful that he didn’t grow out of it before I learned the powerful message he was bringing me.

One day I was in the kitchen when I thought I heard a car in our driveway.

Wondering who it might be, I walked to our laundry room door which opened out into the driveway and looked through the peek hole in the door.

As I stood there gazing through the peek hole, my little boy came running up from behind and squeezed himself between me and door, again exhibiting that odd behavior of pressing his face against the door.

Suddenly, in a flash of comprehension, I understood!

He was copying me!

Laughing, I quickly picked him up and positioned one of his eyes in front of the peek hole. I could see the little light bulb go off in his head as a huge smile spread across his face.

Needless to say, his odd behavior immediately came to a halt.

One look through the peek hole and he had the vision of what I was doing and why.

This experience changed him.

He never again pressed his face against a blank wall or door.

From then on, he dragged a chair to the door and looked through for himself – behavior that made perfect sense.

Children learn by imitation, so he was doing what any normal child does.

He was copying us even though it made absolutely no sense!

We have two doors in our home that open to the front of our house; both with peek holes.

Obviously, my son had seen me and other family members use these peek holes, but being so short couldn’t see them from his low vantage point.

He only knew that we would walk to a door occasionally and press our faces against them.

Although this incident brings to mind many possible analogies and lessons, one of the greatest lessons I learned from it was the power of my example on my children… for both good and bad.

But more importantly, it reminds me how easily we follow and copy things that others do – that society does – that make no sense.

How many false traditions do we pass on without understanding why?

How often do we press our faces against a blank wall?

Reading A Thomas Jefferson Education opened my eyes to many blank walls I had been pressing my face towards.

Like my son, now that I’ve seen through that peek hole and caught the vision beyond the closed door, there’s no going back.

I cannot continue a tradition and habit that doesn’t make sense.

I have to change! And I have to find some way to help others see what I’ve seen.

I have to learn to inspire!

To inspire, however, requires another key point – “You.”

To be a good example requires establishing good habits worthy of emulation –and also means getting rid of bad habits as well.

We have to pull up a chair and get busy studying ourselves, as well as do a bit of weeding.

Eventually we all come to realize that the only person we can change is ourselves, and that changing ourselves is what makes the greatest impact.

This brings to mind a little poem I once heard that has simplified my life and given me hope.

“Your task… to build a better world”, God said.
I answered, “How?
The world is such a large, vast place
so complicated now.
And I so small and useless am;
there’s nothing I can do”.
But God in all his wisdom said,
“Just build a better you.”