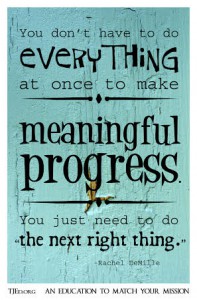 “I get what you’re saying, in theory,” she said into the microphone. “I just don’t know if example is enough.” She paused, so I waited to see what she’d say next.

Then I said nothing.

She waited expectantly, and so did I. Soon a bunch of people started laughing.

“I was kind of hoping you’d elaborate a little,” she said, still chuckling.

“Okay,” I replied. “I’m not suggesting that a parent’s example is all that is needed to inspire your child to seek out a great education, nor am I saying that a teacher’s example alone will do it.” I took a breath, “But I am saying that without a good example of an adult or older student seeking a great education, few learners ever get excited enough to do the work to get a truly superb, Thomas Jefferson level education.”

“When your son or daughter sees someone really working to obtain a fantastic education, it’s inspiring. Example is real power. Not just any example, but the kind of example that sets a standard of passion.

“When a child or youth sees his parent going after learning with real passion, it is impossible to ignore. It’s touching. Always.”

“But is it enough?” she asked.

After a few moments I continued, “And guess what? You can’t say that about anything else. Think about it. What else in education can single-handedly inspire a young person to spend hours and hours and hours, week after week, month after month, studying and researching just because he or she loves knowledge? Only a powerful example does that.

“And there’s more. Even when a parent or teacher’s example doesn’t do the whole job, it at least helps. It sometimes does pretty much the whole work of inspiring great learning in young people, and even when it doesn’t, it is still very inspiring. It’s almost always the first step.”

“That makes sense,” she said.

Using the Tools at Hand

I nodded. “I recently read an article written by a man who has spent the last decade trying to help fight world hunger. He said the biggest roadblock in his work is that almost everyone he talks to wants to come up with funding or programs or ways to grow more food. This is so frustrating for him, because there is no food shortage. There’s just a money shortage.

“What does that mean? It means that anywhere in the world, in the poorest nation, if you pull out your cash and credit cards, someone will sell you as much food as you want. There’s no food shortage.

“It’s just that a lot of people in the world don’t have cash to buy food. So this philanthropist’s big challenge is helping poor people buy food. His work has nothing to do with trying to grow additional food. The food is already on the shelves.

“Likewise, the books and projects of a great education are all around us, just waiting to be studied. We just need to get inspired enough to pick them up, read them, mark them with notes, listen to great teachers, discuss what we’re learning with others, and keep at it long enough to get a Jefferson-level education. Anyone can do it, if we are inspired enough.”

“I get that,” she said. “But how do we always inspire every child?”

“That’s what mentoring is for. We have to personalize to each student. Different things inspire different children at different times in their life. That’s why the conveyor belt doesn’t work for most kids. To really inspire, we have to take an individual approach with each student.

“But—and this is huge—pretty much all inspiration starts with example. If you’re not passionately pursuing learning in your life right now, it’s basically impossible for you to inspire anyone.

“To paraphrase Tolstoy, great education is always personalized and therefore unique, but bad or mediocre education is almost always very similar—it is missing the kind of inspiration that only comes from a good example by a parent or other mentor.”

She was taking notes, so I asked, “Do you want to follow up more on your question?”

“No. I think you’ve answered it for now.”

“Does anyone else have a question?” I asked the audience.

I was about to call on one of the people at the other microphones when another thought occurred to me.

“Oh, by the way,” I said, looking back at the same lady, “You don’t have to be passionate about every subject all of the time.”

“What do you mean?” she asked.

“Well, let’s say you have a ten-year-old daughter, a twelve-year-old son, and a seventeen-year-old son in your home. You don’t have to list every topic all three of them are studying right now and find a way to passionately study all twenty or thirty subjects every day in order to set a good example.

“You just need to show the kids that you are passionately learning something. Better still, show them your passion for learning two topics, or at the most, three. That’s enough.

“When they see your passion, it will translate to more passion for learning their current interests. This is especially true if you study a couple of passions all the time—because over the years they’ll see you hitting a number of topics.

“But even if you’re just starting to set the example right now, it’s enough to really get into one or two topics. Just make sure you really go for it! Get into it! Get passionate about really learning, and your intensity will be incredibly inspiring.”

I smiled and looked up at the whole crowd. “There’s just no substitute for this. It is the most powerful thing a parent or teacher can do in all of education. Your example has massive power. It’s the first line of attack when things are going poorly: boost your example and see how this influences everyone. And it’s just as effective when things are going great.

“Example is power. Use it!”

(Looking for something to inspire you? Check out Mentoring in the Classics.)